African is the second largest continent rich in culture and with diverse rich wildlife across its deserts, savannas, huge valleys, and forests. It is also home to some of the majestic animals in the world, among them is the largest land animal (African elephant) and the tallest animal (giraffe) in the world.

There are many other exquisite African animals you would be interested to know. Here is the list of 5 unique animals you will find only in Africa.

Okapi is the only close relative of giraffe remaining in the world and they are majorly found in the rainforests of the Republic of Congo. Okapis have striped markings on their behinds which gives them a zebra-like appearance. 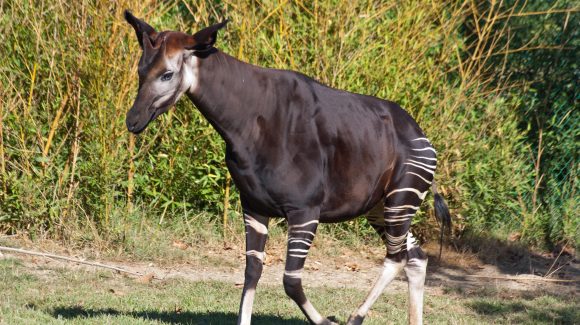 This animal can reach up to 8 feet in length and may weigh between 180-310 kg.  Okapis have long necks and they have a reddish-brown coating with zebra-like stripes on their hind limbs and front legs. These attributes make them blend into the dense rainforests easily.

Okapis have 18 inches long tongues which help them strip leaves from plants easily.

Their feet also have scent glands that produce a tar-like secretion. They used it to mark their territory and to communicate with others while going 0.8-2.5 miles per day in search of food.

Okapi is one of the most endangered animals of Africa due to hunting activities and rainforest encroachment.

The mantled guereza is an attractive monkey with beautiful glossy, black and white fur and an impressively long tail. They can be found in the evergreen forests of West-Central and East Africa.

With a weight of 13.5 kg and a height that ranges between 21-28 inches, a Guereza is a large member of the monkey family. 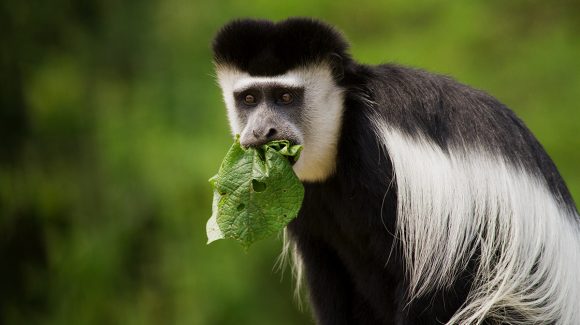 Guerezas live in small groups which consists of 3-15 monkeys and produce different types of calls to communicate with each other.

These monkeys are active during the day searching for food sources.

A guereza’s diet mainly consists of leaves, seeds, fruits, and arthropods and its multi-chambered stomach have specialized bacteria which digest large amounts of food.

Wildebeests have a bull-like physique but they actually belong to the family of antelopes. There are two species of these animals in the world – black wildebeest and blue wildebeest. They are found only in Africa in open woodlands and green plains. 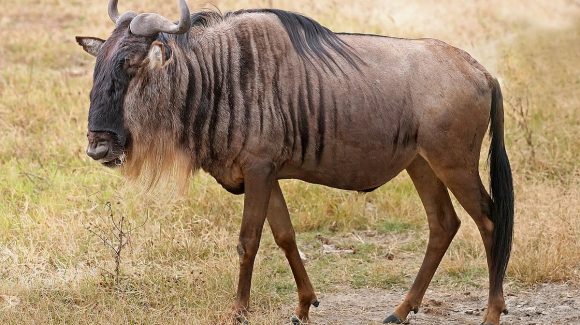 The male and female wildebeests have horns and they can reach 8 feet in length and may weigh up to 275 kg.

They live in large herds which makes it easy for them to migrate as a group of 1.2- 1.5 million towards the North when food sources become scarce. This is the largest terrestrial mammal migration on Earth.

A wildebeest can travel in a day over 30 miles but when migrating, they can cover between 600-1000 miles.

These animals are feed mainly on short grass and are eaten by lions, cheetahs, hyenas and wild dogs.

Greater kudus (known as African Antelopes) are found in the savannah woodlands and rocky hillsides in Eastern and Southern Africa. 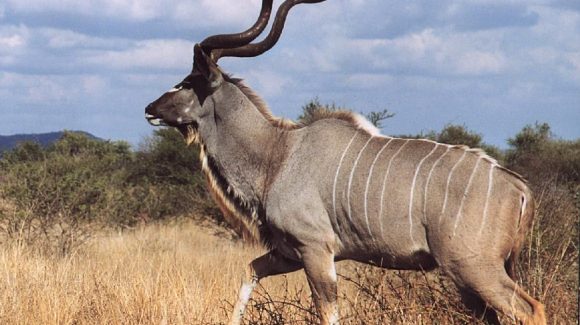 Apart from their brownish-grey coating with numerous vertical white stripes, these animals also have a distinctive white band between their eyes.

Greater kudus are social animals. The females form groups and the male kudos only join these groups during mating season.

These animals feed on leaves, grasses, fruits, and flowers mainly.

Galagoes are small nocturnal primates with a length that ranges between 6-8 inches and they weigh up to 10 oz. They inhabit bushlands and woodlands in East Africa.

Galagoes have thick fur which can be either brown or grey and they spend most of their time moving between branches of trees due to their flexible joints. They have huge ears which give them an excellent sense of hearing. This creature also has large eyes with excellent night vision. 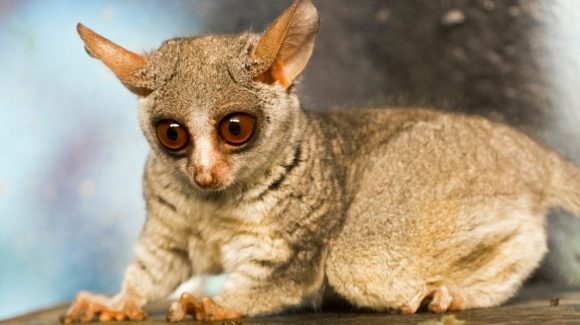 They jump with their powerful hind legs and on a single leap, galagoes can reach a height of 2.25 meters.

Unlike other primates with one tongue, galagoes have an additional tongue that is hidden in plain sight and they feed mainly on tree gums, fruits, and insects. 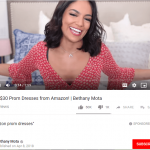 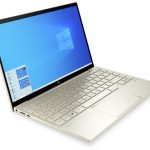